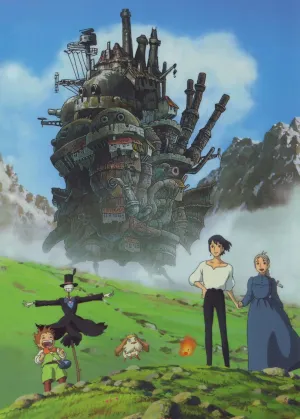 Most of the characters’ heights are estimated by placing them near Sophie Hatter since her height was the only one disclosed by the Ghibli Fandom Wiki. However, when she was cursed to have an older form, her height lost 2 inches. Howl Pendragon’s height is estimated to be 5 feet and 11 inches because Sophie only reaches his chin. On the other hand, the Witch of the Waste has two heights due to being cursed. Her younger form is approximately 6 feet and 2 inches tall, as Sophie is as tall as her shoulders. But when she got an older form, the Witch of the Waste’s height shrunk to approximately 4 feet and 5 inches tall.

Calcifer’s tame form appears to be 1 foot tall since he only reaches Howl’s Achilles heel. Markl, on the other hand, seems to be approximately 3 feet tall as he only reaches Howl’s hip. Then, Turnip Head’s height is approximately 8 feet since Markl almost fully reaches his wooden leg. Turnip Head is actually Prince Justin, who was cursed. In this form, he is estimated to be 5 feet to 10 inches tall since the Witch of the Waste’s older form only reaches his shoulders. With that, Prince Justin’s 1 foot and 5 inches height to the Witch is evident.   Moving on to the movies’ antagonist, Madame Suliman, appears to be 5 feet and 8 inches tall. In a scene where she and Sophie were sitting in one room, we estimated her height when standing, and she seemed to be approximately 5 inches taller than Sophie. Lastly, Sophie shared a similar height with Lettie Hatter, a 5 feet and 2 inches frame.

The Howl’s Moving Castle Fandom Wiki and Ghibli Fandom Wiki disclosed most of the characters’ ages. Most of the characters were adults. Markl is the only child character due to his 10-year-old age. Then, only Lettie Hatter and Sophie Hatter were teenagers. Next, Howl and Prince Justin are closer in age. According to the Howl’s Moving Castle Fandom Wiki, Prince Justin’s age is 20 to 30 years old. But, we estimated him to be 27 years old since his appearance is closer to Howl.

Then, Madame Suliman and the Witch of the Waste are close in age too. Both are within the 50 to 60-year-old age group. Lastly, Calcifer is estimated to be 100 years old since, according to the Wiki, he is a Fire demon.

link to 10 Most Expensive Groudon and Rayquaza Pokémon Cards