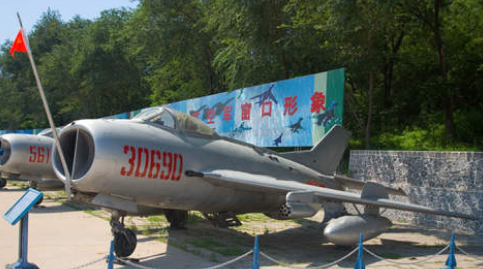 To give you an idea of what an average-sized Chinese fighter aircraft looks like, here’s a combat plane that stands right in the middle of the smallest to the biggest list of fighter planes the Chinese Air Force has operated. The Shenyang J-6 is a twin-engine fighter jet introduced in 1961. According to airforce-technology.com, the Shenyang J-6 measures 48 feet long and 12.9 feet tall, with a wingspan of 29.6 feet.

If we look at it from a different perspective, an average-sized Chinese fighter plane measures as long as a semitrailer truck, about twice as tall as a refrigerator, and as wide as a tenth of a Boeing 747 wingspan.

Next is this smallest fighter jet that CAF has ever built, the Nanchang J-12. According to militaryfactory.com, the Nanchang J-12 measures 33.79 feet long and 12.3 feet tall, with a wingspan of 23.6 feet. In context, the smallest Chinese aircraft measures half as long as a bowling lane, two-thirds as tall as a giraffe, and as wide as half a semitrailer.

Lastly, we have the largest aircraft the Chinese Air Force has ever operated, the Xian JH-7. According to aircraftcompare.com, this twin-engine fighter bomber measures 73.3 feet long and 20.5 feet tall, with a wingspan of 42 feet. To put things into perspective, the biggest aircraft in Chinese Air Force’s history measures as long as eleven king-size beds, three times as tall as Shaq, and as wide as two-thirds of a bowling lane.

THIS IS THE CHINESE AIR FORCE FIGHTER AIRCRAFT SIZE COMPARISON. DO YOU LIKE THIS ARTICLE? IF SO, VISIT OUR CHANNEL EVERLAST VALUE – BUILDERS TO WATCH MORE CONTENT LIKE THIS!