Developed specifically for air-to-air combat, this fighter jet has been a household name since 1969 and has kept its relevance until today. This article will give you all the need-to-know information about the McDonnell Douglas F-15 Eagle.

The aftermath of the Vietnam war was the origin story of our F-15 Eagle. After losing American fighter pilots at alarming rates, it gave so much concern for the U.S. Military Air Force.

On December 23, 1969, the U.S. Defense Department granted McDonnell Douglas the contract to build the F-15. After getting permission for borrowing design cues from NASA, the aircraft’s development and production immediately began. In 1972, the first-ever McDonnell F-15 Eagle took flight.

For decades, the F-15 Eagle has been the U.S. Air Force’s go-to aircraft. The 138-million dollar fighter jet has superior speed, multi-role flexibility, and advanced functionalities that led to its undefeated air-to-air record.

For starters, the F-15 Eagle is an affordable, low-risk solution that maintains capacity and adds the capability for U.S. Air Force missions. It is an all-weather, tactical fighter known for its incredible acceleration and maneuverability. It has two Pratt & Whitney F100-PW-100, 220, or 229 turbofan engines with afterburners. It has a weapon’s capacity of up to 23,000 lbs, including the M-61A1 cannon and different Air Intercept Missile (AIM) types, such as the AIM-9 Sidewinders and the AIM-120 AMRAAM.

Having the fastest speed of Mach 2.5, or over 1600 mph or 2575 kph, it was the first U.S. fighter jet with a greater engine thrust than its weight, making it possible to accelerate vertically. Another thing this fighter jet is known for is its maneuverability. Its low-wing loading, or the aircraft weight ratio to its wing area, makes the F-15 Eagle turn tightly without losing airspeed. Hence, this jet was fast and flexible.

It was its speed and flexibility that made the F-15 Eagle shatter eight world records. According to the National Museum Of The United States Air Force, the F-15 broke eight time-to-climb world records from January and February in 1975. The most notable record broken was the 98,425-feet record in just 3 minutes and 27 seconds.

With its success in the field, the F-15 Eagle has caught the eyes of several military air forces across the world. The purpose of acquiring these fighter jets is to maintain the air superiority of Israel, Japan, Saudi Arabia, South Korea, and Singapore. 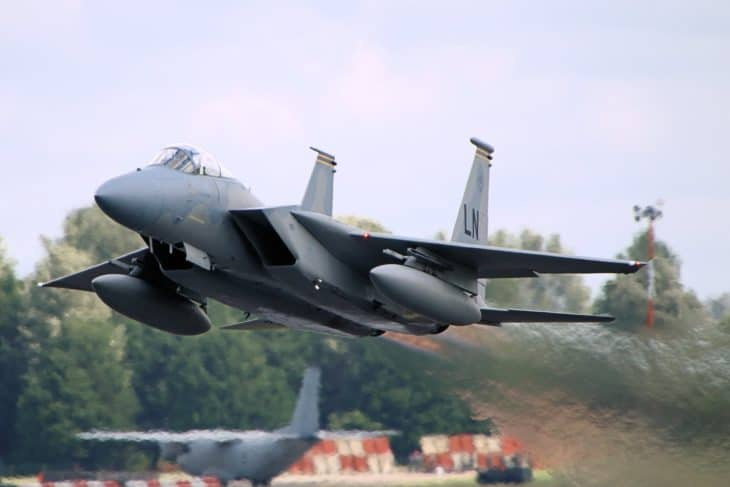 There have been no recorded cases of this jet being shot down in air combat. However, opposing forces have claimed otherwise, but no evidence was ever shown. There have been notable accidents involving this aircraft, but all of them were caused by human error.

An article from the Aircraft Compare website gave us a side-by-side comparison against the Eurofighter Typhoon T1 with the F-15 Eagle having the advantage on the cost-effectiveness of both. The Eurofighter, however, has far more superior features overall compared to the F-15. However, that does not concern the U.S. Air Force as the F-15 Eagle has been in constant development for years to make this fighter jet relevant until 2040.

This time, let’s check some lesser-known facts about this aircraft. It uses this radar called the Pulse-Doppler radar that makes the pilot able to see high and low flying targets without suffering from ground clutter. Furthermore, there have been four variants of the F-15 Eagle, and the most significant difference is two of these variants have an additional seat.

Having an impressive record in air combat makes it safe to say that the McDonnell F-15 Eagle, with the integration of its advanced features and intelligent systems, is undoubtedly one of the best fighter jets that ever existed.

THESE ARE THE TOP 6 FACTS ABOUT THE MCDONNELL F-15 EAGLE. DO YOU LIKE THIS ARTICLE? IF SO, VISIT OUR CHANNEL EVERLAST VALUE – BUILDERS TO WATCH MORE CONTENT LIKE THIS!

#1 The character named Kayara will try to break the rules of the Chasqui Messengers, an elite, male-only league of official messengers in the Incan Empire, since she wants to be one of them which is...

#1 “Strange World” is not originally the title of the movie. The working title of the film is “Searcher Clade” which was revealed last August 2021. However, On December 8, 2021, the official...